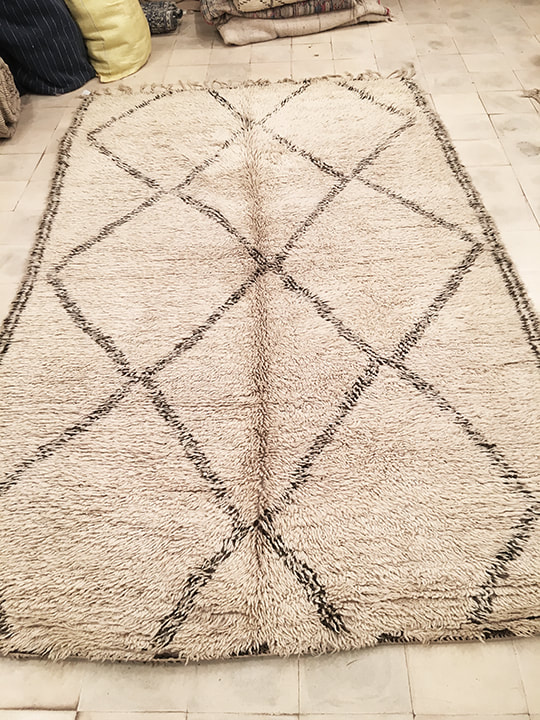 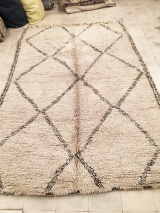 Beautiful Vintage Diamond Design Shaggy Beni Ourain Moroccan Rug 4501, Country of Origin: Morocco, Circa Date: Mid – 20th Century The bold geometric lines of this mid 20th-century vintage rug is a classic representation of the iconic Beni Ourain rugs. These magnificent Moroccan rugs drew the attention of some of the most famous mid century designers and architects. This simplistic yet sophisticated vintage shag rugs were highly sought after for their rustic, natural designs that were used to offset the sometimes cold, harsh lines that were used in interiors of the time. Many of today’s modern interior designers still admire and incorporate them in their interior designs for many of the same reasons.

This beautiful folk art rug uses an allover diamond design pattern that is irregular in shape and appears to be as if it were sketched by the artists hands. Smaller diamonds are placed within the larger ones in a manner that appears to be random and that strays from a strict geometric form. The lines in mid century Berber carpets can range from thick and bold to barely visible. This impressive carpet from Morocco uses thick, bold lines that accentuate the geometric shapes, but are executed in such a way that they appear to be hand-drawn.

The primitive, tribal organic feel of this vintage mid century modern rug can be used in a number of interior design schemes. These highly versatile decorative rugs can be used to complement an organic design with flowing lines, or they can be used to soft and geometrically based designs too. There are many different ways to use this beautiful example of mid century modern tribal art in a way that honors the hands that created it. But regardless of you one incorporates this magnificent shaggy Beni Ourain Moroccan rug, it is the type of piece that is sure to garner much love and appreciation.