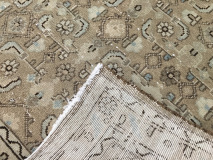 Decorative Tribal Antique Persian Malayer Runner Rug 5292, Rug Type / Country of Origin: Antique Persian Rugs, Circa Date: 1920 –  This gorgeous Malayer rug has a shabby chic appeal that features earthy browns and neutral tones. The richness of the colors and motifs is one of the characteristics that makes Malayer carpets a popular choice among decorators. Malayer is known for its stylized designs that are based on traditional motifs, but that has a unique abstract quality that makes them distinct and suitable for many modern design styles.

Malayer is a large territory that includes both larger urban centers and smaller villages. Rugs from this area can have the formal qualities of a rug created in the weaving centers of the cities, or it can have a more tribal quality, such as this piece. The beautiful pinks and browns give this piece an earthy feel that would complement a neutral room, adding just a touch of delicate color to the space. It would also add warmth and coziness to a white on white space or in a design dominated by neutrals.

The design of this carpet uses stylized renditions of traditional Persian motifs. Malayer rugs are known for their more angular, stylized variations of traditional patterns and design elements. This carpet has the more spontaneous all over design of a village carpet. One of the designs does appear to be in the center, as you would find in a traditional medallion carpet, but the elements surrounding it do not appear to have been formally laid out prior to weaving. The design choices show the individual artistry of the weavers.

Malayer historically produced smaller carpets on an individual level, and they also produced a smaller number of larger pieces. Larger pieces, such as this one, were typically the work of an entire family and were most often commissioned pieces. This is a beautiful tribal carpet that would be perfect for creating an aged and timeless feel in the room. It would be the perfect addition to a Boho chic room where it will give the space an earthy and organic feel. The colors of this carpet have been softened by time, which adds to its character and charm. This rug would be the perfect inspiration piece for creating a serene and soothing space for the perfect weekend sanctuary.