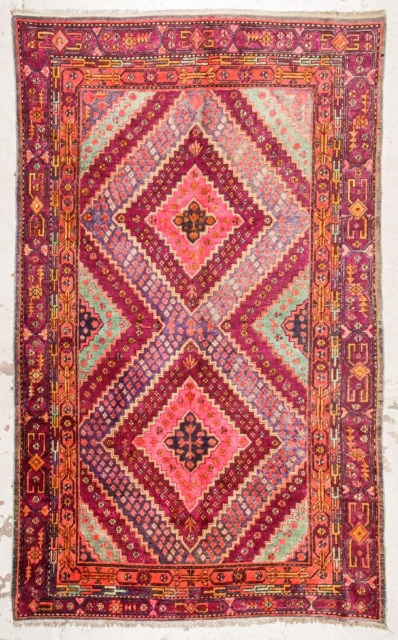 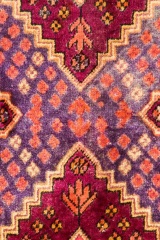 An Exciting Artistic Vintage Purple Khotan Rug 4167, Country of Origin: East Turkestan Rugs, Circa Date: Vintage / Mid 20th Century – This bright and bold mid 20th century Khotan rug is ready to make a statement in any home interior or office decor. The first thing that stands out about this magnificent rug is its use of bright purple, red, fiery orange, green, and ivory whites. However, there is much more to the design of this spectacular piece that makes it even more special.

Khotan is located in East Turkestan in an area that was once a desert oasis along the Silk Road. As such, it reflects the artistic intersection of Ottoman, Persian, tribal, and Chinese art forms. This rug was produced within a few decades after the fall of the Ottoman Empire and this finely stepped medallion  Khotan rug reflects ancient traditions with a modern twist.

It uses a medallion design with two pendants surrounding it. It uses formal corner brackets and a main border, as one would expect to find in a traditional Persian rug. The field of this breathtaking and exciting vintage rug at first appears to be floral, as one finds in many traditional rugs, but if one looks closely these flowers have been transformed into highly stylized geometric shapes that are more representative of traditional symbols found in Persian rug making to convey a certain meaning or idea.

Two grand, finely stepped medallions spread with consummate precision across the field of this stately antique Khotan rug. They are elaborated by further by interior medallions of ever-diminishing scale with tiny rosettes and flowers filling the intervening spaces. Half- and quarter medallions of the same type fill out the remainder of the field. The borders consist of double vinescrolls with highly stylized flowers and rosettes which, though different from the field design, still retain its perfect, geometric drawing and ornamental detail.

Another interesting quality of this funky purple color rug from Khotan / East Turkestan is its use of color balance. The reds and purples of the vintage Khotan rug are placed in such a way that they highlight the ancient symbols used in the medallion and pendants. Using purple throughout the main border gives the design rug a sense of balance, without detracting from the central focal points.

This beautiful East Turkestan vintage rug is ready to add brilliant color, vibrancy, and energy to any room. It can be used to add a modern twist to traditional designs, or brighten up a modern, contemporary interior design.