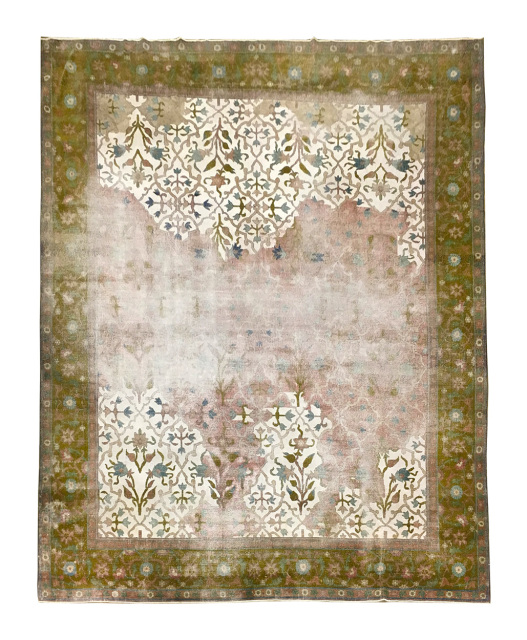 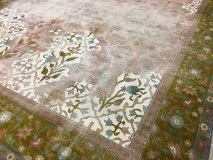 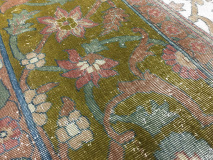 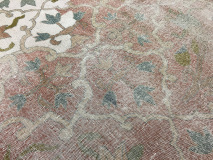 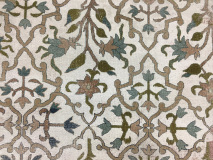 Antique Agra Indian Rug 5070, Origin: India, Circa: 1920 – This magnificent square antique Agra rug uses an earthy tone-on-tone design that is elegant and graceful. Agra is an Indian town that has a history of carpet manufacture that dates back to the early days of the Mughal Empire. Many of the designs show a Persian influence, as the Emperors wanted to emulate the style and wealth of the Persian carpet industry.

The Mughal Emperors dictated that the weavers use traditional Persian motifs in the beginning, but they eventually began to add their own flourishes and touches. By the time this carpet was produced in the early 20th century, the style had evolved into one that was easily recognizable as an Agra rug.

The colors of this rug use a range of olive greens, blue, pink on a ivory background. This allows the weaver to create shading and highlights that give the design a more realistic appearance. In Agra rugs, you sometimes see motifs imposed on top of another, cutting part of the motif underneath it, which is something that you only rarely see in Persian designs. Agra rugs also create some motifs in outline only, which is another unique characteristic.

The design of this rug is graceful and elegant. It has a classic feel that would be perfect for a traditional space. It is also a square piece, which makes it a rare find. The colors would pair well in a room of earth tones, including trendy colors such as meadow green, red pepper, and deep dragonfly blue. The theme of the rug reflects the natural world, and this piece would be an excellent way to bring a bit of nature indoors.

This antique rug could easily fit into a formal space with its sweeping curves and fine weave that is carried out with precision. Its colors also allow it to blend into a Boho chic or more casual design, too. It makes the perfect base in a room that features elements of the natural world in the materials and colors.