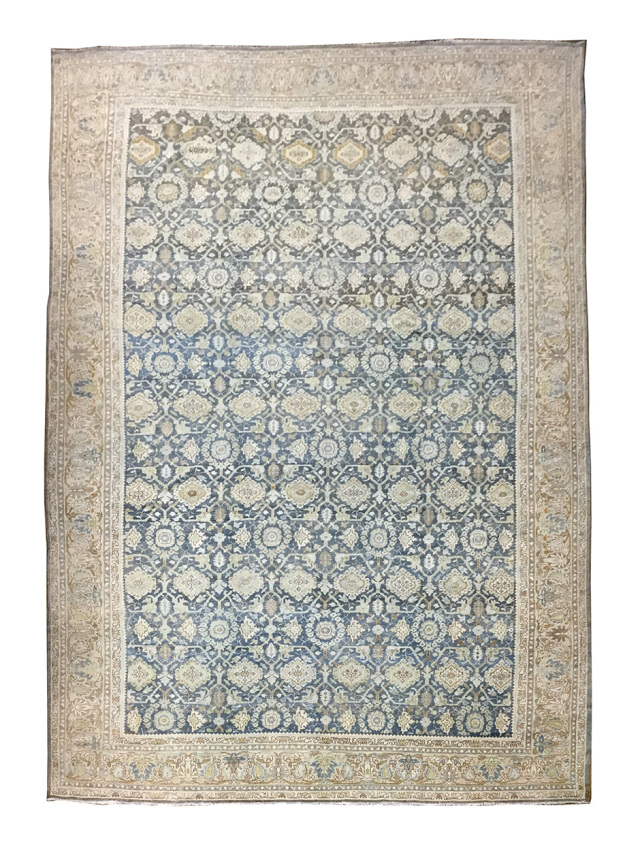 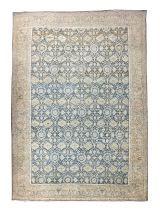 Beautiful Large and Decorative Antique Persian Malayer Rug 4323, Country of Origin: Persia, Circa Date: Early 20th Century – Persian Malayer carpets have a tribal appeal that makes them a favorite among collectors and designers. The dark midnight background of this carpet produced in the early 20th century has a classic appearance and worldly character. Malayer rugs are typically smaller, and the production of larger pieces, such as this one, were limited.

Larger rugs were often woven as a family endeavor and are rarely seen from this part of Persia in the early 20th century. They were usually woven on commission, and a family would not undertake such as large endeavor without first obtaining a buyer. This piece is a fine weave and might have taken a year or more to create.

Malayer carpets draw from a large pool of designs that were used in traditional Persian rug weaving, but they also show a high degree of individual artistic freedom. This creates a carpet that has a traditional character but still reflects the individual artistic choices of the weaver. The rich colors and wide variety of motifs are some of the characteristics that make them so beautiful.

This design has several interesting features that might not be apparent at first glance. The design appears to be an all-over design, but if you look closely, the central design is a variation on the Herati design. This traditional motif means “water” or “fish” and is a sign of good luck. The designer of the carpet used this as you would typically see in a medallion carpet.

Malayer is known for both medallion and all over designs. This carpet seems to show a bit of each. The artist also included several other larger repeating motifs that give it formal structure. The carpet has formal corners, although they are small.

The overall layout of the antique carpet is similar to a formal Persian medallion design, but the smaller “filler” details do not follow a similar structure. It appears as if the individual weavers included their own choices in the details of the carpet, while otherwise sticking to the overall formal design. This gives it a formal structure, but also, a highly developed individual character.

This is a unique Malayer rug for many reasons, making it an interesting piece for a collection. In interior design, the rug would make a beautiful piece upon which to base the rest of the room design. It has a formal character that could easily blend into a contemporary space, but it also has an inviting tribal character, too.